Today was a random day in so many ways.

We went into MaM’s classroom at the little school to celebrate her birthday. 7 of the 12 students in the room? Were my former students. MaM introduced us as, “Mrs. McNally & L___”. We went through her timeline, we watched her walk around the sun five times, we ate yummy fairy cupcakes. I got the question, “Are you still a teacher here?”

When we got home, I was met in the driveway by FedEx with my prize fromi the 1-800 Flowers drawing at BlogHer. I was thrilled to sort through the yummies included in the Arbor Afternoon basket.

As I was looking at the treats, I joined a conference call with Marcie and an event planner–go to Grown In My Heart to see what we are cooking up ( there’s a question, a giveaway and an announcement!).

Then, finally, Date Night. Also known as Indy’s Social Media Happy Hour. We dropped the kids off at our friends’ house and jetted off……in a 2010 Camaro, compliments of Hare Chevy. 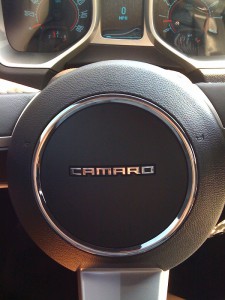 I am not a fast-car kind of girl, but DAMN. The car was hot & so much fun to drive. Everyone who drives a minivan every day should go take a test drive. SUCH a rush!

Hare was sponsoring a kickoff party for Blog Indiana, which just happened to be held at Sun King Brewery, and featuring West Coast Tacos (the taco truck was parked in their warehouse, the taco truck taking Indy by storm). The night was filled with catching up with online friends in person (Angie, Robby, & Stephanie to name a few) and meeting new ones. (I count myself as coming out ahead if my night doesn’t include cutting someone else’s meat, pouring milk or negotiating how many bites are left to take)

Not bad for a Thursday.