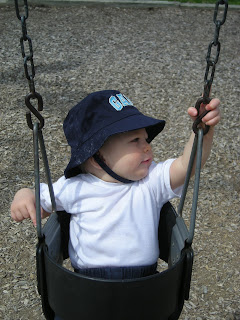 During the summer of 1998, I nannied for a family with two young boys. It was a great job in many ways, who wouldn’t want to get paid (in cash, every Friday) to play outside all day long? These boys were huge playground fans, and they had a name for every playground we haunted.

There was “alligator park” (with a slide like an alligator), the “rock park” (old school playground with pea gravel as ground cover), “grammy’s park” (park by grammy’s house)…you get the picture. This was before the explosion of the Internet, but when I read about the KaBOOM! mission to map online 100,000 playspaces in 100 days, I immediately thought of those boys.
KaBoom! has issued the challenge: to map 100,000 playspaces in 100 days. Here’s what counts as a playspace: a playground, field, a skate park, roller hockey rink, lake, dog park, community center, basketball court or ice rink – any place where kids can engage in unstructured play for free or a nominal fee. A playspace listing on KaBOOM! consists of an address or cross street and a description, one photo and one rating.
Why map playspaces?? If playspaces are mapped throughout the country, think about what a great resource that will be as you travel this summer. When we take trips with the kids, finding a playground to use during a pit stop is a life saver. And who knows, maybe there’s a gem of a park just outside your usual radius that could become your new favorite space.
MomCentral has teamed up with KaBOOM! and for every playspace mapped through this promotion (just join MomCentral team during the sign up process), MomCentral will also donate $1 to Jumpstart, which promotes early childhood literacy, a cause near and dear to my heart.
So go…gather the info on your favorite local playspace. Then head to KaBoom! go to “find a playspace” and from there, go to “map a space” and map your space. That’s it. Moms across the country will now know a great spot in your neck of the woods, and Jumpstart will get just that–a jumpstart on funding. I took the kids to the park Saturday anyway, came home and mapped our spot–it took maybe 10 minutes and was very easy.
And your public service duties are done for the week!
This post is part of a blog tour sponsored by KaBoom! and MomCentral.

One Reply to “KaBoom! A Playground Project”