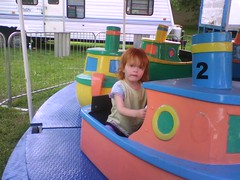 This weekend was absolutely perfect in so many ways, I don’t know where to begin!

The weather was fantastic, we had fun things to do, not a lot of errands to run (we may run out of something important this week, I suppose) and we made it through Mass without leaving “general population”–a very big milestone in the Babe’s spiritual development!

I guess the first big thing is that the Babe experienced her first church festival as a toddler. And guess what? She’s tall enough to ride a few rides–BY HERSELF. I think she really thought she was in fact steering, she looked so serious. By the end of the afternoon, she knew the drill–wait in line, go find a boat (train/apple/horse), give the lady the tickets, get buckled, ride, and so on. Is she really as big is as she’s acting these days?!?!
The reason we went to said festival was to see our friend’s ba 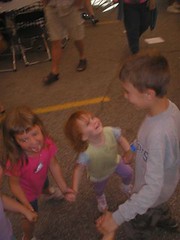 nd play. Big fun in the beer tent (with minors…..LOVE the Catholic Church for that)–the Babe discovered her love for modern and classic rock. (and our friend’s son, by the looks of it)

She danced for what seemed a good hour, with just a look of sheer bliss!

We wrapped up the weekend at a birthday party Sunday afternoon, complete with bouncy house. Pictures of that are posted on the Flickr site.

We got to visit with friends we don’t see very often, and of course, the Babe had a ball bouncy like a maniac and also painting with Crayola sidewalk chalk paint (or something to that effect). She’s so to the point where she just runs around with the other kids, not needing anything but some juice or some crackers from me (and actually she helped herself a few times) it just crazy. Last summer she was just figuring out how to walk. This summer already she does a crazy high-stepped run and says, “Running! Running! Running!”