This year family Christmas celebrations got spaced out, and we found ourselves doing one last round on January 8th. Before reaching our final destination, we stopped by my grandmother’s assisted living center for a lunchtime visit.

If I’m remembering correctly, the last time we had lunch with Grandma, it was her 100th birthday, and there was a reporter there, and the mayor showed up. There was less hoopla this time, and the table was only set for five, but it was far from uneventful.

We had fun catching up with her, and when the kids shared they had been roller skating recently, she confirmed what I had told them – that back in the day, she was in a Roller Skating Club. They were called the Capitol City Rollers, and had the emblem of the US Capitol embroidered on their jackets. They traveled up and down the east coast to skating rinks.  I am uncertain as to whether or not they rumbled with other clubs, but I know they had fun. She also reminded me of this fun tidbit: my grandmother and her three sisters ALL met their husbands at the roller rink. I’d heard it before, but the family line was that my great grandfather would say, “Thank God for the skating rink,” at night when he said his prayers. 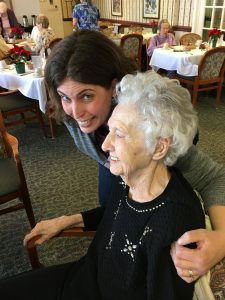 In watching the Fox eat his lunch nicely, she was reminded of another story – again, one I’m fairly certain I’d heard before, but the rest of my family hadn’t. Years ago, Patterson, NJ had a theater district and the accompanying restaurants that go with it. One night after seeing a show with girlfriends, they were out to dinner at nice restaurant. A young boy caught her eye- his table manners were outstanding, although she couldn’t believe he was out so late at night.  “I had planned to go over and compliment him and his mother as were were leaving, but before that happened, he lit up a cigar. He wasn’t a kid, HE WAS A MIDGET!” We had a solid laugh at her misjudgment, and she laughed at herself, even though this likely happened nearly 80 years ago.  (We also reviewed etiquette with the children should they meet a little person.)

The crowning laugh of the day though was when I passed over the weekly schedule to her. Each day, there are a couple of activities, such as pet therapy, bible study, and crafts. There’s also a library program. After reading the schedule, she had just one observation – “They spelled library wrong. I guess we’re getting a liberry program.” That was it. Due to our extreme love of all things Unbreakable, the kids were set. “Great Grandma said Liberry! Great Grandma said liberry!”

ICYMI, here’s the quote of which we speak. Nearly daily:

Titus: Wait, why aren’t you at the liberry?

Kimmy: My study group has already fallen apart. Can you teach me math?

Titus: Girl, didn’t you just hear me say “liberry”? I went to public school in Mississippi. They told us the dinosaurs went extinct because that asteroid turned them gay.

So there you have it. Another meal with grandma, and three more gems I hope to never forget. I also hope to still be persnickety about spelling and grammar when I’m celebrating my 104th Christmas on earth.