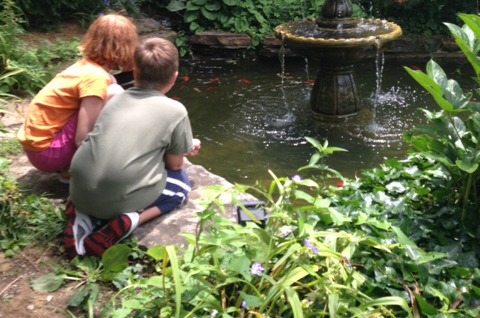 Three years ago, my aunt was visiting, and she was telling me her plans for her Golden Jubilee (her 50th anniversary of being a religious sister), which would be happening in 2014. We chatted about it, and reminisced about her Silver Jubilee, which took place when I was a teenage (ahem). As I got to thinking about logistics (I’m a Virgo, I immediately start planning logistics), it hit me- in 2014 I’d have a six year old and a nine year old. A first grader and a fourth grader.

I couldn’t *quite* picture it at the time- at the time, I had an almost first grader and an almost preschooler. Potty-training was still on my mind, and I was apprehensive about my daughter starting a new school. There was a stroller in my trunk, and a five point harness car seat strapped to the middle seat. I had yet to travel with the children when they had both slept well away from home.

Fast forward to 2014- we are East Coast bound at the end of July. My aunt’s having a party, and everyone in the family has a special job. I’m not concerned in the least about the twelve hour car ride or four night hotel stay. What seemed like a dream three years ago is coming true. Six and Nine are kind of awesome.

Six and Nine carry their own suitcases.

Six and Nine are much better sleepers than any age combination before them.

Six and Nine can travel for hours without incident.

Six and Nine know where New York City is, and have opinions about what we should see while they’re there.

Six and Nine can make it through a family party with no special provisions, except maybe a charged iPhone.

Six and Nine are happy to have adventures without me, but are always eager to tell me all about.

The summer of Six and Nine might be my favorite summer yet.

2 Replies to “The Summer of Six and Nine”