That at some point, both children warmed up to the guy in red. 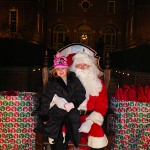 That I got over my fear of making sugar cookies.

That we trekked out on a snowy day to cut down our own Christmas tree.

That we made most of our Christmas ornaments (many with applesauce & cinnamon). 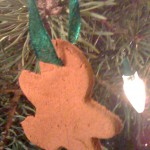 That both kids really like playing the snow, wherever we were.

That MaM was geeked to help with stamping the Christmas cards and wrapping gifts. She also got into hiding gifts for her dad and brother. “They’re in my dresser drawer, Mommy, because they won’t look there.”

This was the year…

That MaM explained Christmas to Junior through song, quoting “Santa Claus is Coming to Town” almost daily as Christmas approached.

That Junior became obsessed with The Grinch, and “his green hands!”

That we watched The Wizard of Oz together during a cold snowy night during the week before Christmas. 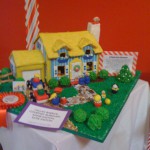 That I showed MaM what my Little People Dollhouse looked like when I was a girl, via gingerbread (part of this year’s display at Conner Prairie).

That we played in Jolly Days, and Celebration Crossing.

That MaM discovered Cole Porter during her “Mom and Dad” day during the week before Christmas.

That MaM got dressed up as an angel for the 4:30 Children’s Mass. 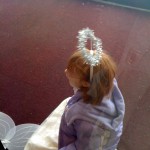 That the four of us took a second to take a family photo (we don’t do that often enough….perhaps a goal for 2011 in the making…). 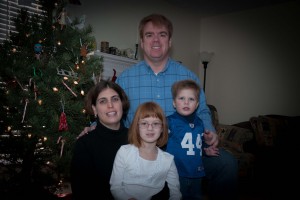 Ah, it’s been a good long run, this Christmas Season.