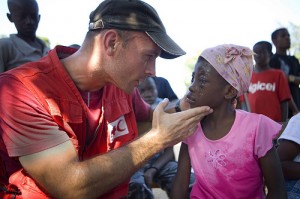 I woke up this morning to learn about the aftershock that shook Haiti. I also woke up to a tweet that told of group of Haitian children coming to Indiana, for temporary and possible adoption placements. I had heard that the first plane of children granted Humanitarian parole had landed in Pennsylvania. I wasn’t sure what group could be coming to Indiana, or why these children would need host families (all children currently cleared to leave the country are supposed to be eligible for adoption). I hadn’t had my coffee yet, but tweeted that request out to a few choice Twitter contacts who knew how to find host families. Before my coffee had finished brewing, they were on the task.

I disclosed to these select tweeps that I hadn’t verified the email, but that I knew, being the professionals they were, that they would.

I watched the Twitter stream light up with buzz about finding these children homes almost instantly. I saw reports that emails were streaming in at an unheard of rate. That there was no way all emails and tweets about this could possibly be answered in a timely manner.

But I’ve decided that it doesn’t matter. There are some good things that came out of this manic day. (I say this not as the social worker or out reach coordinator who spent the day on the phone and at the computer furiously trying to figure this thing out)

1) I hope the organization, Safe Families for Children got some exposure and a new battalion of volunteers. The more I read about their mission, ” The program’s goal is to reunite children with their biological parent(s) in a home that is more stable and healthy, in part because of the contribution of the Safe Families intervention,” the more I like it.

3) That awareness is raised about the plight of orphans world wide. That the estimated 100-150 million children in the world who are orphans get some notice, and maybe, just maybe,  a family to love them.

4) With more reading (always more reading on this Internet), I’ve been directed to some great information sources. Tonight’s find (courtesy of Tonggu Momma): PEAR , Parents for Ethical Adoption Reform. They seem to have put the pieces together of what went down today, with suggestions on how to make sure what’s going on is legit.

The bottom line is that it’s fairly common for interest in adoption to rise in the aftermath of a disaster. It doesn’t, however, happen quickly after a disaster.  Disaster zones are prime spots for baby-selling, human trafficking, and other crimes. After the 2oo4 Tsunami, the State Department actually blocked adoptions from affected countries because the situation was ripe for abuse.The dust, in this situation, needs to settle literally and figuratively before the future of these children can be determined.

What concerns me is how these children are going to be care for while everything is sorted out around them. Are there enough caregivers left to adequately care for all of the orphans/children separated from their families? Ideally, these children could stay in their homeland. Is this the best solution? I don’t know. Would temporary placements someplace else (either in the Caribbean or US)  provide better quality care?

To see more photos from the Red Cross, here’s the link to their Flickr slide show redcross