***This giveaway is now closed. Thanks for playing!***

The Situation:
One of the best discoveries a baby can make is the discovery of GRAVITY…you know that magical power that takes a sippy cup, toy or cracker down to the ground, every time!

Being a firm believer in the five-second rule, I don’t have a problem with Junior pitching his cup or his toys over the edge of his booster seat in our kitchen. After a point, the game is over, either he loses interest or I tire and take whatever he is throwing away. No worries.

The game is different when we are out and he is in his car seat/stroller/restaurant high chair. The game is suddenly played with higher stakes–if I don’t *catch* what he’s throwing, it will land out of his reach in the backseat of the car. Or it will land in a puddle of something on the pavement in a random parking lot. Or it will land the oh-so-gross floor of a local fast food establishment. EEK.

This is why I was so excited to hear about No Throw a simple tether that attaches anywhere, to basically anything a kiddo may want to throw. I’ve had it now for about a week, and it already ranks as an item that “works for me”. Invented by crafty twin sisters who ended up traveling a lot with their young children, No Throw solves the two problems I have with Junior’s games of fetch.

#1-it saves most things from hitting the ground, which is a good thing when we are out and about in the big, germy world.
#2-it keeps the object of his affection within his grasp, but not in his grasp. He can take a sip, throw, and then retrieve his cup all on his own.

Because the only force stronger than gravity in my boy’s life is independence. 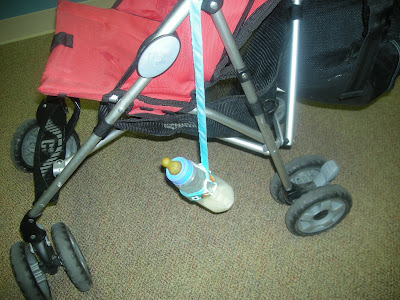 Here’s his bottle on the No Throw tether, dangling in the air, rather than on the floor. 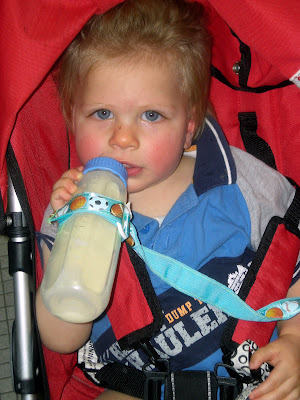 The bottle is easy to reach, yet still throwable….

So I had only concern with this product………what about strangulation?!?!? Really, I don’t think it’s possible, with supervision and some common sense. The strap is long enough to reach from the edge of a stroller/high chair, but is not long enough to wrap around a child’s chest. There are ample warnings on the product, including one that warns against attaching to the child. I have to say though, I’ve attached it to myself while holding the 24lb boy in a cradling position, feeding him and walking all at the same time. It’s handy.

No Throw is available at most Walgreen’s nationwide, as well as select baby stores. You can also visit nothrow.com and purchase directly–currently there are some shipping specials (read: free) to sweeten the deal.

***the GIVEAWAY***
HOWEVER, if it’s your lucky day, you could win a No Throw for your kiddo right here. Just visit their website, checkout their available designs and tell me which one you think you’d like to have. (I won’t hold you to it if you are the winner)

In your comment, be sure to tell me which design you’d like, and make sure you leave a valid email so I can contact you. One lucky winner will be chosen Sunday, May 17!

Check out the rest of the great ideas at Works For Me Wednesday…it’s a great way to find tips and blogs and products and everything else, especially home on a sick day…. if you are hunting giveaways, check out Household Treasures Weekly Mr. Linky for Giveaways!

15 Replies to “No Throw stops games of Mommy Fetch *GIVEAWAY*”