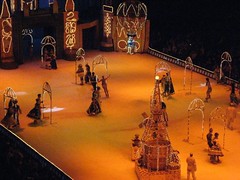 Especially when it’s on ice skates!! This past weekend we were able to go see Disney on Ice: 100 Years of Disney, and it was incredible.

I remember going over to Notre Dame as a kid, on field trips and with my family to see the Ice Capades. The last time I went was in college, when a friend and I went to go see Aladdin.

This was spectacular because it was a montage–there were scenes from Beauty and the Beast, Cinderella, Nemo, Toy Story, Mulan, Pinocchio, Aladdin, the Little Mermaid, the Incredibles and the Lion King. It was really amazing–all the dancing and acrobatics, on ice skates. The photo is of the first act’s finale–“It’s a Small World”. Those arches? Yeah, they skated with those, and formed a gazebo, and everyone had a costume on from around the world…..and there was an Eiffel tower and palm trees they were dancing with too.

MAM enjoyed it thoroughly, and Junior was fascinated by the lights and sounds. BgK said he “didn’t get it” (though he was impressed by the stunts. Seriously, pushups on ice skates). I told him that was OK–we could make it a “Mommy and Me” tradition. I’d happily go again and again….