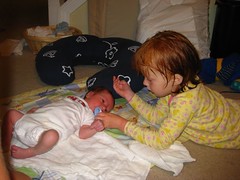 Of course, everyone wants to know how MAM is adjusting. MAM has, to say the least, a very, um, strong personality. She is an absolute and precious joy–especially when she gets her own way. Otherwise? Sometimes it’s dicey.

So how’s she doing? She’s a trooper. She loves to hold her brother, help with the bottles, bring him diapers. She does have a knack for needing things as soon as I sit down to feed him, but you’ll have that.

A few days ago she put on her girlfriend’s shoes and said,”I CeCe!” and she spent the afternoon being called CeCe and CeCe was MAM. Last night, she declared, “I Baby A!” and she only answered to the name Baby A for the last two hours before bed. When I asked where MAM was, she said, “Sleeping in the crib” (where babe was sound asleep).

But today? We went for a walk around the block–babe in the sling, MAM on her bike. At the halfway point, she told me she was tired and wanted to be held. I told her that if I held her, I couldn’t carry her bike too–we’d have to leave her bike on the sidewalk. I told her she could push it or I could push it. She chose to push the bike all the way home. Such a trooper!!