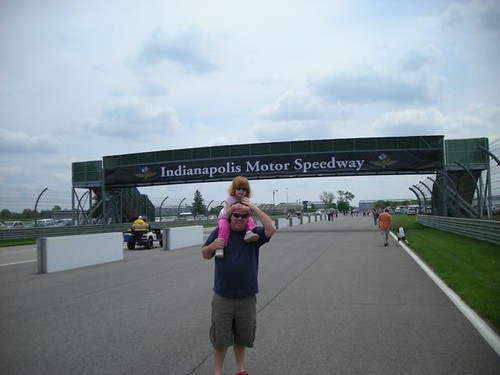 I resisted the “racing thing” for a good long while here in the Circle City. Most years, we left town “race weekend” (s) , or at least, we’d avoid the west side of town. Then, suddenly, BgK started “going to the track”, the way some people golf in mixing-business-with-pleasure sort of way. Then he started telling MAM about it.

Saturday we went to the track for Pole Day–the beginning of qualifications to see who lines up where on race day. MAM was excited. She happily donned sunscreen, sunglasses and ear plugs–she was going to see the race cars.

She even got to see Danica, walking from the garages to the pits.

“Danica drives a black and blue car! Danica number 7! Danica has an M for MAM on her car!” 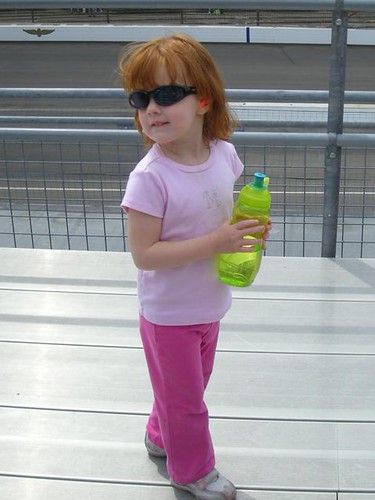 After all that walking and climbing and jumping, we decided to take the tram back to the parking lot. 500 other people had the same idea, and while we were all waiting patiently and in an orderly manner, no tram was in sight.

BgK then notices a bright red golf cart–the Cha Cha mobile, if you will. He chatted them up for a few moments, then asked if we could get a lift….and we did. We, the chosen three, got to hop in a snazzy red golf cart and got a personal lift back to the parking lot. And we got to find out about Cha-Cha. And because they gave us a lift when we needed it most, I’m telling you all about Cha Cha too. 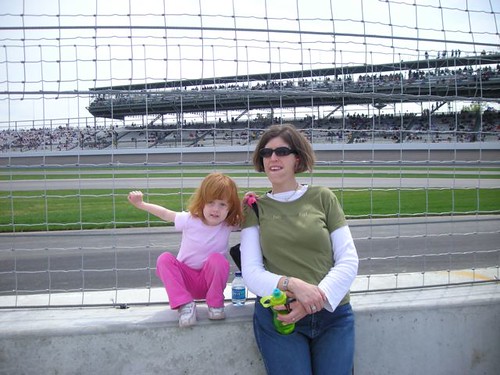 Simply put, Cha Cha is an answering service–text or call them, ask a question, and in a few minutes, they’ll get back to you. Seriously, a real person will investigate what you need to know for you and let you know the answer. Handy if you’re not near Google yourself, or don’t have to time to investigate something. And just kind of fun–we asked what we should name McBaby and the answer came back with the most popular names from last year. Clever, eh?

One Reply to “Zoom-Zoom, Cha Cha”