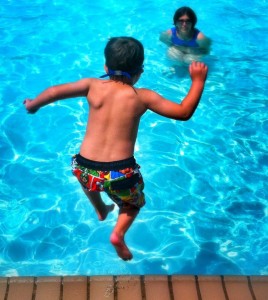 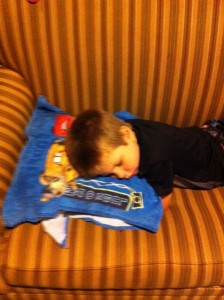 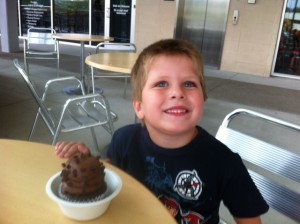 This past week the kids and I spent our mornings at vacation bible school. Every day, from 9:00am- 11:30am, we participated with about 100 of our closet friends. There were flying pigs, a talking chipmunk, some cool science experiments and fun games.

And there were songs.

Oh my were there ever songs. As a volunteer, I received a CD with the music for the week. Every day, twice a day, the whole group sang a few songs, all with actions. Every day, on our way to and from VBS (and everywhere we went) we listened to the CD. Well, MaM wanted to listen. The Fox wanted to sing. After a few screaming matches we compromised.

The ride to VBS is for listening.

The ride home from VBS is for singing.

It really is the little things that can make or break a day.

This year the service component of the program was raising money and awareness for Operation Kid-to-Kid’s efforts in suppling mosquito nets to African children in need. Each day, in addition to learning to TRUST GOD, learning Bible stories and having fun, the kids learned a little more about the importance of helping others and the dangers of malaria.

MaM and the Fox didn’t talk much about VBS at home, except for singing the songs non-stop.

Then tonight I noticed the mosquitoes must have gotten the Fox last night. One of his thighs was a maze of welts, and he was scratching them as he got ready for bed.

“Mom, why did the mosquitos get me?”

“Well, they get everybody. They use your blood as food.”

“They use your blood too, right?”

“And the kids in Africa!”

From there, he explained to me that the mosquitos in Africa have bad germs, and kids can die. And that mosquito nets can help keep the bugs out. And then he used his sheet as a mosquito net, and showed me how the bugs couldn’t get through. He talked and talked, and quite clearly had a grasp on what the whole project was about.

He never ceases to amaze me.

Are your kids experiencing Sky this summer? It’s seems to be the go-to theme for Catholic and Protestant churches alike. Want to get them excited about it?  Check out this video: