I don’t see movies like a used to (last week was an awesome exception)- but when I do, I like to make sure that I’m seeing something worth seeing on the big screen. There are a few movies I remember seeing quite vividly from my younger days, either because they were extremely good or something memorable happened before, during or after the show. I worked at a movie theater on college breaks, so my knowledge of early 90s major motion pictures far surpasses any other time period.

In no particular order, here are some movie memories of mine:

Seeing E. T. in the theater, at night, while my grandma was visiting. It was kind of a big deal.

Going to see Snow White on the silver screen with my aunt. I was a young teen, and felt a little silly seeing a cartoon in the theater, but it was summer break, I was visiting family on my own, and why the heck not?

Trying to see Men at Work. This is something my high school friends I still laugh about, and I think it’s the only movie I’ve ever walked out of. I don’t know if the movie was actually that awful, or if we were just restless teens wanting to do something else, but after about fifteen minutes, the whole group of us got up and left.

Going to see Death Becomes Her. I only remember this because I totally screwed up, and told my friend that we were going to see Buffy the Vampire Slayer. In the days before cell phones, we didn’t catch up with her until after the show.

Going to see Sleeping with Enemy and Silence of the Lambs, only because my friend’s mom asked, “How was Sleeping with the Sheep?”

Going to see Forrest Gump in a sold out theater…because the physical film jammed, and snapped in two and melted onto the projector for a second. And my friend Jason was the manager who had to calm the masses, and the movie had to be spliced together (not uncommon).

My first date with Leilan was to go see Mr. Bean’s movie known as Bean at a dollar theater.

My other random memory comes from going to see American Pie with friends at a now defunct movie bar and grill. It was Long Island Iced Tea night, and we laughed SO HARD. I’ve often longed for another movie bar and grill to come along, to enable more exceptional movie experiences like that one.

MY WISH HAS BEEN GRANTED!

Studio Movie Grill has come to town, and it’s offering everything thing I love about the movies! Their newest location is located on the northwest side, at 3535 West 86th Street.

And I supposed kids would like the idea of a “movie dinner” at the theater too. (Kids eat free with purchase of an adult entree on Thursday nights for a limited time; also, it should be noted there’s no minimum order, so you don’t have to order food.)

Want to enter to win your own four pack of tickets? (Take your family! Take your friends! It’s up to you) 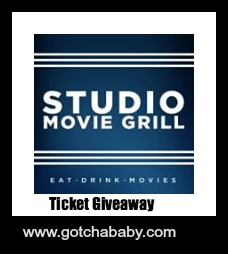 There are several ways to enter this giveaway-

1)*  Go like my Facebook page: www.facebook.com/gotchababyblog. It’s lonely. It needs fans. Once you’ve liked it, come back here and leave a comment telling me that you did.

Additional Entries after #1 is complete:

That’s it! Thanks for playing. Several winners will be chosen and notified on October 30th around 9pm. Winners will have 24 hours to respond, if there’s no response, a new winner will be chosen. Two notes about these passes: the only restriction for viewing is that they are not accepted for movies on the “no pass” list- so check it before you go; they are also valid until mid-November. So get out your calendar and make a movie date soon!

Want more chances to win? Tickets are being given away all around the Indianapolis blogosphere!

Emily at EmilyFenicle is giving away tickets!

Crystal at Mom For Less is giving away tickets!

Brooke of Brooke’s Nooks is giving away tickets!

Kara of Kara’s Deals and Steals is giving away tickets!

Disclosure: I was furnished with passes as prizes for this giveaway, as well as passes for my family to enjoy. My fondness for Long Islands while watching raunchy movies is completely my own.