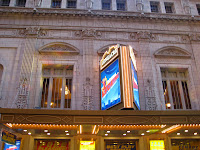 Most of our weekend in NYC revolved around BgK and his love of the dance. But I couldn’t get Carrie Bradshaw out of my head. So I bought a dress and some shoes, and was determined to have a SATC moment while I was there. How could I not?

So Friday afternoon I got in line at the TKTS booth, and landed tickets for Boeing Boeing. We took a quick jaunt downtown to South Ferry and jumped on the Staten Island Ferry for a quick pass of the Statue of Liberty, and then dashed back to the hotel to change for the show. Time was a ticking. so rather than playing Carrie and Mr. Big, we ended up playing The Office, and had some pizza at Sbarro (hey, it was on Times Square, at least). And hey, they sell wine at that Sbarro, so it wasn’t all bad.

Boeing Boeing was a fantastic show, and two nights later, it won a Tony Awards for best revival, and best actor, Mark Rylance. How did I pick it when we were literally within walking distance to any and every Broadway show currently playing? Well, first I set the criteria that the tickets had to be 50% off, and I scoured the TKTS website to see what might be available. Based on what might be available (there’s no telling til it’s your turn in line), I made a short list of what sounded good, discovering that straight plays are going to be cheaper and more available than most musicals. While in line for tickets, flyers were passed out for the night’s offerings, and as soon as I saw that Bradley Whitford was starring in Boeing, Boeing, that sealed the deal. We got balcony seats for right around $30 each.

The show is a hilarious, slap-stick farce involving one swarmy bachelor, three air hostesses, a French maid and an unexpected visitor. We laughed, and then laughed some more.

BgK realized at some point in the evening (was it the little wine bottle at Sbarro? was it his wrinkled Hawaiian shirt? I don’t know) that maybe we weren’t Carrie and Big…but we could probably pass for Miranda and 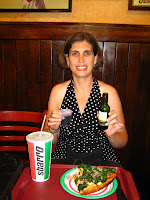 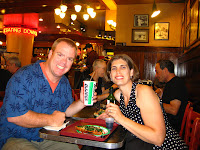 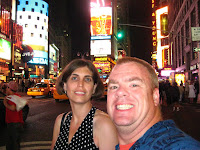 One Reply to “Boeing Boeing”