We are into summer break here at the Kahuna house. It’s time for trips to the pool, time for playing on the playgrounds around time and time for summer reading at the library. It’s also time for those summer afternoons where it’s really too hot much of anything.

Enter: two fun apps the kids have been trying out for the past few weeks.

Gigglebear: Comes with Giggles for a Good Cause

MaM has been spending her iPhone time (my iPhone, her time) playing GiggleBear. Developed by an Indiana teen named Brooklyn, MaM has been fascinated with this app. Brooklyn came up with the idea for the app after complaining to her dad that all the games she was playing were boring. He challenged her to invent something better, and according to my first grader, Brooklyn did.  Gigglebear starts by players designing a stuffed animal in the “creative center”, and then taking the animal through a playroom full of games to play. After a week, MaM has a  wall of trophies in the playroom, earned by playing different games. Every touch of the screen reveals something fun. It’s intuitive enough for five year olds to play, and comes with handy directions for grown ups when needed. The game integrates the music on your iPhone, features a bathtub and blow dry for your pet and a bevy of wardrobe changes. An added bonus is that the app is set up for multiple users, my exploring what the app does doesn’t mess up what MaM is doing.

The app is available for purchase in the iTunes store, and a donation will be made to the Vera Bradley Foundation for Breast Cancer research for each download. Read more about how this game came to be and the amazing teen behind it at GiggleBear.com. 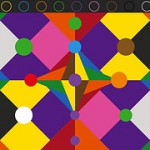 Spot the Dot: An App for iPad by author David A. Carter

The fox does better with iPad apps than he does the iPhone. For starters, he can’t prank call my friend Kate on the iPad, like he does every single time he plays with my iPhone. The iPad is faster than my iPhone, and the bigger screen is easier for him to use. Enter Spot the Dot from Ruckus Media Group (I reviewed some other apps by them a few months ago). Spot the Dot is simple concept — the object is to spot the dot (get it?) of  a certain color on each screen. Every time you open the app, the dot is in  a different place, so it continues to be challenging even after you’ve played a few times. The graphics on this app are amazing — each screen is different and visually amazing. By tapping and sliding his fingers, the fox is able to navigate this game by himself. But I kind of like to sit by him and watch.

So that’s what you’ll find the Kahuna kids doing when they are too hot or too tired to do anything else.The trick is going to be getting them to put these fun games down when it cools off enough to get back outside!

Disclosure: I was provided free downloads of Giggle Bear and Spot the Dot in exchange for my honest review. My opinions are entirely my own.