Two weeks ago, Heather, Julie and I tried something new. We trekked downtown (which isn’t seeming so far away for Heather these days, she’s there a lot) and we attended September’s Indy WordLab. It’s true. I spend my day looking at words, and for fun, in the evening, I went to an event about words.

It was so much more than that.

For starters, I finally got to see Indy Reads Books for myself. It’s a real used bookstore, located right on Mass Ave. It operates as part of Indy Reads, Indianapolis’ Adult Literacy education initiative.

There’s a speaker (usually a writer) who leads the group in some kind of writing exercise.

Our group was lead by Indy WordLab organizer and author of Nothing New: An Irreverant History of Storytelling and Social Media, Ryan Brock. He led us in an exercise that started with 30 minutes of writing, then a shorter amount of time (6 minutes?) and then finally, 90 seconds. The only requirement was that we include the phrase “autumn leaves”.

So what did I write?

I wrote about my kid, of course. Here is my 30 minute product. It kind of sums up what’s been going on around here the last few weeks. It was inspired by the fact that she learned to ride a two-wheeler on my birthday. It’s not a gift I’ll soon forget.

The end of summer is a new beginning. New shoes because her feet have grown. New backpack and lunchbox because her tastes have changed.

She’s asking for phone numbers and posting on My Big Campus. She guards passwords and tracks her allowance. The training wheels have come off as the neighborhood pool closed, and she’s taken off down the street.

Her birthstone earrings have been returend to her jewelery box, and she’s raided mine for a pair of hook earrings.

Autumn leaves turn as she leaves one place and surges head first into the next. 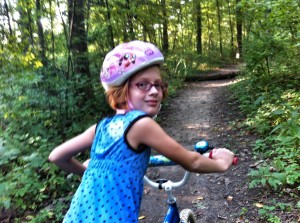 After we wrote, we shared in small groups. It was like a college writing class, except it was free, it was for fun, and there was no grade.

And we’ll be going back in October. Are you interested in joining us?