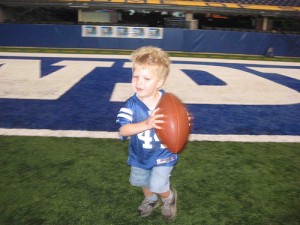 Just in case you’re not a fan of the Colts on Facebook, you don’t follow me or @bgkahuna on Twitter and we don’t know each other on Facebook, here’s the link that made my night last night!!

On the video page there’s a link that says “share” and it says I’ve shared it successfully on WordPress, but I sure can’t see where it’s been shared.

The boy now sits, riveted, saying “And-roo, football, again!” over and over as the video plays. He’s the boy in the still photo at the beginning of the video (looks similar to the one above) and he’s running toward the end zone around the :50 second mark (in the #44 Dallas Clark jersey). You know it’s him by his crazy hair!

Day 8 of NaBloPoMo is done! Phew!

**edited: this link is long since dead, but I heart this photo of him so hard, I’m keeping the post.