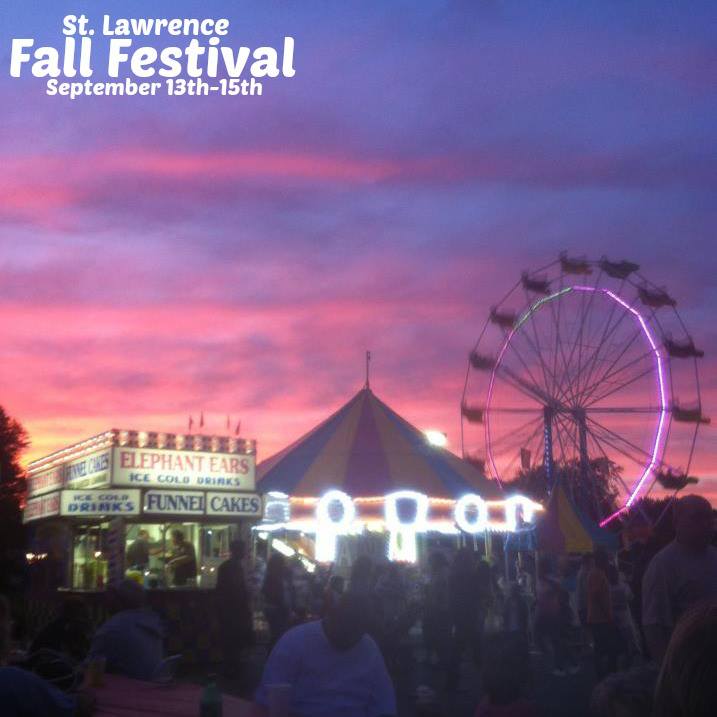 You know what my kids love?

Anyway. They LOVE a carnival. The more Midway rides the better. The more bounce attractions, cotton candy, and bands to dance to, the better. Gone are the days of pushing the stroller and packing sippy cups and hoping that skipping naptime doesn’t completely screw them up.

Now we can hit the ground running and have fun until closing time (or pretty close to it).

The St, Lawrence Fall Festival (located at E.46th & N. Shadeland) is happening September 13-14-15th and promises to be a ton of fun for everyone. And unlike the State Fair, there’s beer and and a gaming tent (see- fun for ALL ages!). Admission is free, as is all of the musical entertainment, all weekend long. There will even be a performance by Hoosier native and Nashville recording artist, Corey Cox.

Want to win a prize pack to make your time at the St. Lawrence Fall Festival more enjoyable? Have a I got a giveaway for you!

ENTER TO WIN A PRIZE PACK

I am giving away a prize pack that includes 10 carnival ride tickets and $10 worth of food tickets for the St. Lawrence Fall Festival. The total value of this pack is $20, and will get you started on your good time!

1) Go like the St. Lawrence Festival on Facebook (there are some great photos on this page) – and leave a comment here  telling me that you liked the page.

2) Go follow the St. Lawrence Festival on Twitter and tweet the following: “I just entered to win a prizepack to enjoy @stlawfallfest from @gotchababy, and you can too! http://gotchababy.com/?p=3488” -come back and leave a comment here with your Twitter handle, telling me you followed & tweeted.

3) Leave a comment here telling me what your favorite thing to do at a festival is.

Want more chances to win? Enter at these giveaways as well:

Disclosure: I was compensated for writing this post and coordinating the giveaway, but my enthusiasm for a good beer tent is all my own.

Ah…that’s better. Are you seeing any malware warnings? I hope not. My friend Spencer seems to have cured what’s been ailing this blog for awhile now- so welcome back, and have a read. This is a post I wrote as an Indiana Family of Famers Table Talk Ambassador. It originally appeared at bgkahuna.com during my quarantine.

After much consideration, I think October may be my favorite Indiana month. There is so much to do, and so many ways to celebrate fall in central Indiana, I actually schedule it all in so we don’t miss anything (Calendars. It’s what I do). October is a big month for agrotourism in Indiana and all across the midwest- it’s finally time to enjoy the fruits of the farmers’ endless labor.

There’s pumpkins and corn mazes and apple picking and so many hayrides it’s hard to keep track. I love bringing the kids outside in this long pants-short sleeve weather, where they can soak up the sun and  marvel at the change of seasons

Taking a break on an actual pumpkin.

This year, we took the kids to a real pumpkin patch- a field where pumpkins were actually growing on the vine. They wandered happily for nearly an hour, exploring the field, moving the pumpkins around and generally soaking it all in. There is something about being in the moment, being in the place where food is grown, that is centering in a way nothing else is. To find a pumpkin patch near you, check out My Indiana Home’s Pumpkin directory.

We also made it to a corn maze, where they trekked for another hour. Not only was it an adventure, it was a good lesson in the way our food depends on the weather. Last year, the maze was lush and green, with stalks so thick there was no cutting through. This year, the stalks were short, thin, and dry. The corn that did grow was unusable, and there were bald spots in the maze where nothing grew at all. While they may be a little thinner than in years past, it’s still fun to get lost in a field. Find a corn maze near you using My Indiana Home’s Corn Maze directory.

My son had the thrill of apple picking for the first time with my parents. We typically shop at the store rather than a farm market, and by doing so, I think we’ve forgotten what fresh produce tastes like. When I bit into that Rome apple grown in northwest Indiana, my mouth was shocked at the flavor. So delicious. Because they are detail oriented, the kids have had a great time taste-testing apples this season- in a blind taste test, they know the difference between a Golden Delicious, a Gala, and everyone’ most favorite, the Honeycrisp. For everything apple, check out My Indiana Home’s Apple Page.
For a list of seasonal crops and where to pick them, see this handy pdf: http://www.in.gov/isda/files/Harvest_Calander.pdf.

Thanks to Indiana’s Family of Farmers Table Talk program for providing me with some fall-themed goodies, passes to Kelsay’s Fall Fun on the Farm  and handy information about Indiana’s agrotourism. October is also National Pork Month- can you say BACON? Learn more on Indiana’s Family of Farmers website, and connect with them socially @FamilyofFarmers and www.facebook.com/familyoffarmers.