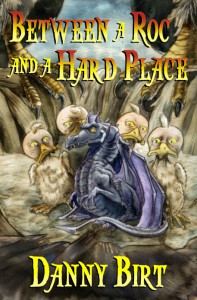 For the past five years or so, I’ve been collecting picture books with an adoption theme. With MaM getting older, it’s time to branch out and find some “chapter books” that weave an adoption story line, and it’s also time to find books that don’t just talk about babies being adopted. Enter the new book “Between a Roc and a Hard Place,” by Danny Birt.

ToyBox Books send me a copy of the book to review, and I am so glad that they did. “Between a Roc and a Hard Place” actually starts with a scene that reminded me of the PBS Kids show, “Dinosaur Train” — an egg lands in the nest of  a different, even a predatory, species. The Roc family is surprised that a dragon has hatched in their nest, but they name her and she becomes part of their family. It doesn’t take long for Tephra to realize that she is different from her siblings, but it’s their similarities which bond them together. As Tephra grows, her life takes her in a very unique direction, being the only dragon among birds. Ultimately, her integration has a very positive outcome for the entire kingdom.

Children who like fantasy books will love this book for the magical land that author Danny Birt has created. The process of giving animals their names will enchant, and the plots against humans will entertain. The book is written for children age nine and older, and has recently won the National Parenting Center’s 2010 Holiday Seal of Approval. The adoption theme, and some of the issues adoptive families work through are present, but I wouldn’t classify this as solely an adoption book. It’s available at Barnes and Noble and should delight many a young reader!

Disclosure: I was sent a free copy of the book to review, the opinions of the book are all mine.

Earlier today, while on Twitter, I heard about parents starting a boycott of Amazon. I followed a few conversations, and figured out that there was a e-Book in their Kindle store that was causing a stir. Clicking on the link, I found that it linked to book that is basically a guide to pedophilia.

I couldn’t believe it — I mean, I’ve purchased things for my children on Amazon.

In scanning articles tonight, it appears that Amazon is holding to its position that it will continue to sell the e-book. Their statement in response to the criticism is as follows: “Amazon believes it is censorship not to sell certain books simply because we or others believe their message is objectionable. Amazon does not support or promote hatred or criminal acts, however, we do support the right of every individual to make their own purchasing decisions.”

Amazon just made it very easy for me to make a major purchasing decision — I won’t be shopping there unless that book is taken down.

Do I believe in Free Speech? Of course.

Do I believe in the Free Market Place? Of course.

What I don’t believe in is the promotion of the exploitation of children.

I don’t believe in a company so lacking in morals that it will make money selling formula, baby toys, and children’s clothing on the exact same domain name that caters to pedophiles.

They are not doing a public service by allowing this e-book to be purchased. They are doing nothing but taking an opportunity to make some money on a book that could possibly destroy children’s lives. They are looking only at the bottom dollar of what they may make on this book.

Which is really too bad for them.

If you want to read more, follow #boycottamazon on Twitter, type that search term into Google or Facebook  or try this article on Tech Crunch http://techcrunch.com/2010/11/10/amazon-defends-pedophile-how-to-guide/

(Warning: it contains an excerpt from this filth. I started physically shaking, and almost threw up reading it. It is sick, it is wrong. It is in bad taste.)

IT IS A DANGER TO CHILDREN AND NEEDS TO BE REMOVED.

I’ll keep you posted. Til then, I’m sitting on my Amazon credits. I’m not posting affiliate links. If this all dies down (as causes and boycotts sometimes do) and the book is still available, I’ll use up my credits on some more items for the Pajama Program and call it a day.

MaM has hit the question stage in her young life. Not the “why” stage her brother is in, but a whole different kind of question stage. Here’s what went down last night as she was getting ready for bed:

“Mommy! Dad showed me the moon is out tonight ,and so’s Jupiter!”

“Yes, I did. Mommy, who drives Jupiter?”

“Yes. Who drives it? Honey, it’s in orbit around the sun like our planet, Earth.”

“It means that something goes around something else. Jupiter and Earth orbit around the sun.”

“There are no people on Jupiter.”

“Well, Jupiter is very cold, you’d have to take a spaceship there” (I think it’s cold. Which planet is Jupiter? M V E M ….?)

“A spaceship? How do you drive  a spaceship?” (are they called spaceships? can you even ever get there? would it take light years?)

“Well a space ship travels in space ,and you have to be an astronaut to work in one.”

“An astronaut? What’s an astronaut?” (Where are those Tang commercials when you need them?)

“Well, an astronaut learns all about the spaceship. Most astronauts have been in the Air Force , and you have know a lot of science.” (Is it the Air Force? or is it Navy? Are they even training new astronauts? Is NASA defunct yet?)

Enter Mad Science’s KNOW Magazine. KNOW Magazine is a new, advertisement-free science magazine for kids ages 6-9 yrs old. Colorful photos, activities and interesting articles for parents and children alike will engage any budding scientist. I think MaM is seriously going to dig the experiments. I’m just hoping I can keep up with her!

I wrote this review while participating in a blog tour campaign by  Mom Central on behalf of Mad Science and received the products necessary to  facilitate my review. In addition, I received a gift certificate to thank me  for taking the time to participate.