My quick post on MaM’s “punishment stool” from 2006 still gets a lot of hits. Sometimes I can tell it’s a query about toddler discipline, sometimes it’s from something freaky (my favorite query? “diaper discipline for girlfriend).

I look back on the post and laugh-Jr is SUCH a different toddler than MaM was. I go to that post and think, “wow? did she really do that?” And then I think back to all the chairs I had to move into the bathroom (because she was standing on them), I think about the fact that we DID buy a new dishwasher because that knob she liked to turn was going to be the death of me, and that the following spring we had a whole debacle on Spring Break I now dub, “The Spring Break Nap Time Smack Down” (there was no smacking, but there was JUMPING off of dressers!!).

Jr is so different. Now granted, I’m probably different. I’m older. I know there’s a light at the end of the tunnel.

Jr listens when I say “no” the first time. If he doesn’t, he calmly ( and sadly) goes to the time out step. What happened to the stool?? Well, a few weeks after that first post, the stool was thrown. After that, I started putting her on a particular step.

I don’t know, but I’m going to enjoy my fairly laid back toddler while I can! 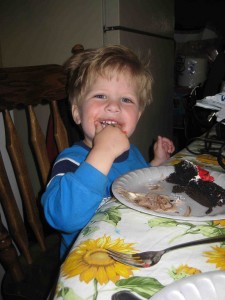