This has been one of the most free-form weekends we’ve had in awhile. Today, MAM was feeling well enough to venture out a little bit. This afternoon, after a daunting rainshower, we were able to head over to Marian College, my alma mater, to take part in a family fun walk. Junior was happy to stroll in the double stroller/bike trailer. He was even happier after he wiggled out of his shoulder straps! 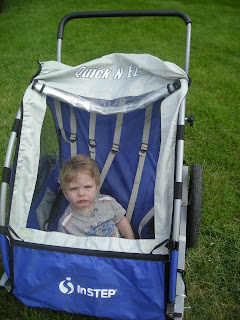 I thought it was a good sign that MAM wanted to walk the first bit of the route. Until she started focusing on the flags that lined the course. She had to inspect *each*and*every*one*. After about 600 feet and a billion little flags, she tired of the game and was happy to sit down next to her brother. 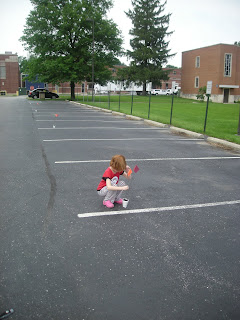 After all the walking, flag inspecting and strolling, the cold water tasted GOOD! 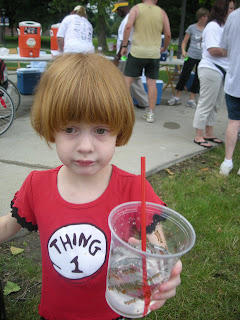 When we were done at the race wrap-up, we walked over to the fountain. Let me begin by saying that Marian had a major face lift after I graduated. Where this fountain stands now is where I parked my car in the early ninties. You’d never know it now. 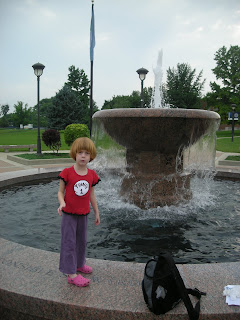 MAM sat right down, popped off her crocs and soaked her feet after tossing two pennies and making two wishes. 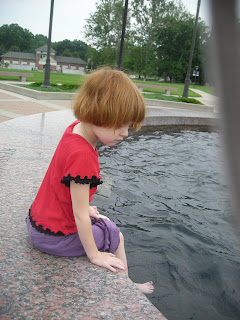 After we left, I realized that this is probably the last time I will take the kids to visit Marian College. On June 27, 2009, Marian will become Marian University. Even though the name will change, so many great memories will remain for me. And I love that we live close enough that after the name change, there will be new memories too!