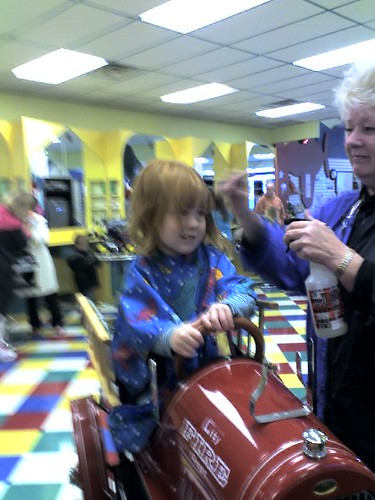 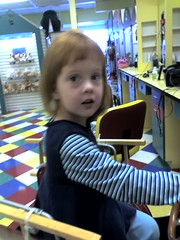 Yesterday we took MAM for her fourth ever haircut. Last week I got my hair cut, and when she saw me, she noticed and then started talking about getting her hair cut. She started telling me about sitting in the fire truck, watching a movie, going down the green dino slide…she has the routine down. And since I am kind of tired of brushing the boogies out of her locks after she she sleeps (her hair reached her nose, you see), I thought it would be a good idea.

You see the finished product–a stylish cut where you can see her face, even if her hair isn’t up!! We also got a little more trimmed off the back–which means, for the moment, the curls at the bottom are gone. She looks like she’s about 16, but I’m getting used to it.

While we were there, a dad walked in with his little guy, who couldn’t have been more than 18 months old. He registers, his kiddo goes to play on the slide, and he makes a phone call. Normal, right? Normal, right up to the part where I hear him say, “It looks like your ovary didn’t stimulate very well cycle…” or something to that effect. I kid you not, an RE was calling a patient from Cookie Cutters. This man was telling a woman that she wouldn’t be getting pregnant anytime soon with children screaming in the background. He was telling her all sorts of things–he talked on his phone throughout his son’s haircut until it went dead…..and then he continued to talk on the stylist’s phone. Seriously. As they were vacating the fire truck seat, and we were moving in, I overheard him saying something to the effect of, ” We can certainly explore the IVF option if you feel you’re ready for that., there are financial burdens that go with that, as I’m sure you know….” Yes, still talking to the same poor woman.

Am I kidding? I wish I was. I don’t know if he thought it would be a quick phone call–hey, you didn’t stim well, don’t sweat it, just call the office and we’ll set you up for next month…. or whether he knew it would be involved and just didn’t see the inappropriateness of it all, but WOW.