It can only mean one thing…..MAM is insane!!! She woke up after a marathon nap on Friday ready to play outside, so I don’t know what the fever is all about. Does anyone know–are fever and diaper rashes related??? After wearing a pull-up for her marathon nap, and then over night, she’s sprouted the worst diaper rash I have ever seen. EVER. Like if it doesn’t get better by tomorrow, we’re calling the doctor.

Anyway, after a play date yesterday, she had another marathon nap, and ended up staying up an hour later, which I thought was perfect, since we were turning back the clocks. It was so not perfect. 4:45AM. 4:45AM she’s up, and ready to be changed, because, you know, that rash business isn’t pleasant. After about 2 hours of attempting to lay down with her (our bed, her bed and everything in between), I gave up and we’ve been “up” ever since.

The great thing about the internet is that it, unlike Target, is NEVER CLOSED. I can complain here and not disturb anyone who may have the luck to actually be sleeping.

As moms have muttered around the world since the beginning of time…..”It’s a good thing she’s cute!” 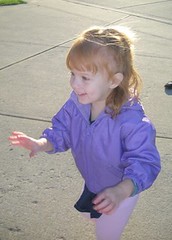 One Reply to “Posting at 7am on Sunday?”